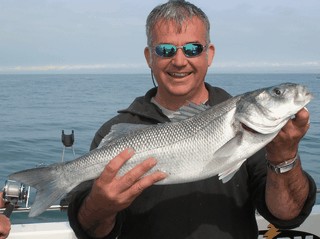 For many, Bass is the most sought after fish in these waters because of their looks, the fight and because they are often the largest round fish you're likely to catch in these waters.

The smaller bass tend to group together whereas the larger Bass tend to keep to themselves.

Dusk and dawn are key feeding times for the bigger bass, and they will often search for food around a specific area, usually just behind the breaking waves on big sandy beaches, but plenty of rock marks and estuaries will also hold bass (especially true in Teignmouth!).

Bass can be caught with both lures and bait, although it is worth noting that the largest bass approaching record sizes which anglers catch are almost always caught on baits rather than lures. Smaller school bass are common around harbours and rocky ground as well as sandy beaches and, as they are both less fussy and more common than larger bass they generally make up the majority of catches.

Be careful when unhooking a bass as the spiky first dorsal fin and sharp gill covers are capable of piercing or cutting skin.