Can be caught on bottom or on float. Favourite baits are peeler crab, rag worm, lug worm. Very common here in the South West and I think one of our nicest looking fish! See: Wrasse in-depth

Scavenger of the sea bed. Will eat just about anything it finds. LSD's tend to find food by smell. Can be found in all types of seabed. See: Dogfish in-depth 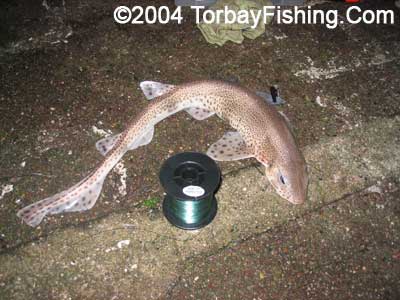 Very similar to the lesser spotted dogfish (above) but the bull huss also has dark patches along it's body. Normally found in deeper waters, rocks and wrecks.

Normally found near the bottom. Main diet is crustaceans like crab and lobster but will also take squid and small boney fish.

Not something you catch often but I happened to catch one in May 2015. Held by my daughter Hannah. Click to enlarge.

Found during the Autumn and winter months and is favoured on sandy beaches. Best baits are worms and use small hooks.

(Photo supplied by Jonathan Grimes - Thank you!). Best baits are worms and can be found on sandy and shingle beaches.

Found during the spring and summer months. Best baits are worms and crabs.

Quite rare in our waters but they do appear. Worms do well with this fish on small hooks. Caught from sandy and shingle beaches.

Very common during the summer months. They will target anything shiny including mackerel strips, feathers etc. Normal depths are around 8 to 18ft but during the winter months can be caught on the bottom. See: Mackerel in-depth

Very common and can grow into monster fish. From shore can be caught using lures, floats etc. Record shore caught pollock is just over 18lb. Best baits are worms and crabs.

Found during the winter months and can be fished on float or other rig. Best baits are worms, squid and mackerel pieces.

Found hiding in rocks and won't venture too far out from its hole. Mackerel flappers, fillets and other large baits are best for these.

Very common during the summer and they tend to follow the mackerel in. Caught on float, Garfish tend to swim at shallower depths than other fish. If you're catching lots of these and nothing else drop the depth another 5ft.